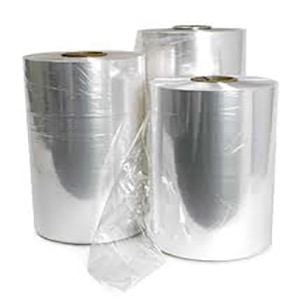 One of the common questions we hear from first-time manufacturers or companies who are launching a new product is, “What type of flexible wrapping film for packing is best suited for my product?” It’s true, with so many options to choose from, comparing the variety of films can be overwhelming (PP. PET. LDPE. All those letters look a little bit like alphabet soup). Although the most popular film for flow wrapping is Polypropylene, our packing specialists have listed out a few of the top film applications, so you can make the best choice for your specific needs.

Polypropylene is the most commonly used film for horizontal form fill and seal which provides a containment seal and protects the product from dirt and dust. It can be used to over wrap snack foods such as candy and baked goods. The common make-up of this film consists of an outer layer (commonly acrylic coated to prevent the film from melting), a polypropylene core and a sealant layer on the inside.

Polyester films perform well in high speed applications and offer superior optical, physical, mechanical, thermal and chemical properties. This film won’t shrink due to high temperatures like polypropylene does. They are commonly used as an outer layer in laminations with other materials providing structure-strength to film. The processing tolerances of PET film makes it the ideal choice for vacuum metalizing, coating and laminating.

The shrink film wrapping process involves enclosing a product(s) in a shrink film. The film is then formed around the product using a sealer. Then, the product is heated by a hand-held heat gun or automated heat tunnel equipment so that the shrink film shrinks around it to create a tightly sealed package.

Several film types fall into the shrink film category including films made from polyethylene and Polyvinyl Chloride. These films are always run on semi-automatic or fully automatic shrink wrapping equipment. A variety of products can be wrapped using shrink films and some types of shrink wrap are also FDA approved for direct food contact.

Also included in the shrink film category is Polyvinyl Chloride (PVC). Polyvinyl chloride is actually one of the most used plastics in the world and is often chosen by manufacturers because of its high clarity and stiffness. PVC is used for everything from construction profiles to medical devices, from roofing membranes to credit cards, and from children’s toys to pipes for water and gas.

Whether your distribution applications requires 10 or 200 packages per minute to run, Hughes Enterprises will advise you on the right system or eco-friendly material to efficiently package and ship your products safely. Our packaging specialists will gladly help you choose the material that provides the solutions that are right for your application. Contact us today at 267-409-6100.

Get pricing information and strategic guidance from the experienced team at Hughes Enterprises.

What are you looking for?